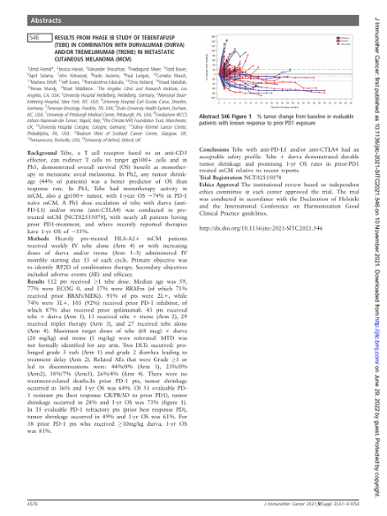 Background Tebe, a T cell receptor fused to an anti-CD3 effector, can redirect T cells to target gp100+ cells and in Ph3, demonstrated overall survival (OS) benefit as monotherapy in metastatic uveal melanoma. In Ph2, any tumor shrinkage (44% of patients) was a better predictor of OS than response rate. In Ph1, Tebe had monotherapy activity in mCM, also a gp100+ tumor, with 1-year OS ~74% in PD-1 naïve mCM. A Ph1 dose escalation of tebe with durva (anti-PD-L1) and/or treme (anti-CTLA4) was conducted in pre-treated mCM [NCT02535078], with nearly all patients having prior PD1-treatment, and where recently reported therapies have 1-yr OS of ~55%. Methods Heavily pre-treated HLA-A2+ mCM patients received weekly IV tebe alone (Arm 4) or with increasing doses of durva and/or treme (Arm 1–3) administered IV monthly starting day 15 of each cycle. Primary objective was to identify RP2D of combination therapy. Secondary objectives included adverse events (AE) and efficacy. Results 112 pts received ≥1 tebe dose. Median age was 59, 77% were ECOG 0, and 37% were BRAFm (of which 71% received prior BRAFi/MEKi). 91% of pts were 2L+, while 74% were 3L+. 103 (92%) received prior PD-1 inhibitor, of which 87% also received prior ipilimumab. 43 pts received tebe + durva (Arm 1), 13 received tebe + treme (Arm 2), 29 received triplet therapy (Arm 3), and 27 received tebe alone (Arm 4). Maximum target doses of tebe (68 mcg) + durva (20 mg/kg) and treme (1 mg/kg) were tolerated. MTD was not formally identified for any arm. Two DLTs occurred: prolonged grade 3 rash (Arm 1) and grade 2 diarrhea leading to treatment delay (Arm 2). Related AEs that were Grade ≥3 or led to discontinuations were: 44%/0% (Arm 1), 23%/0% (Arm2), 38%/7% (Arm3), 26%/4% (Arm 4). There were no treatment-related deaths.In prior PD-1 pts, tumor shrinkage occurred in 36% and 1-yr OS was 68%. Of 51 evaluable PD-1 resistant pts (best response CR/PR/SD to prior PD1), tumor shrinkage occurred in 28% and 1-yr OS was 73% (figure 1). In 35 evaluable PD-1 refractory pts (prior best response PD), tumor shrinkage occurred in 49% and 1-yr OS was 61%. For 38 prior PD-1 pts who received ≥10mg/kg durva, 1-yr OS was 81%. Conclusions Tebe with anti-PD-L1 and/or anti-CTLA4 had an acceptable safety profile. Tebe + durva demonstrated durable tumor shrinkage and promising 1-yr OS rates in prior-PD1 treated mCM relative to recent reports.

Journal for Immunotherapy of Cancer