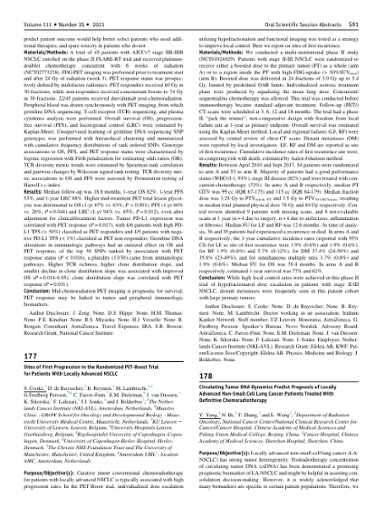 Purpose/Objective(s) Curative intent conventional chemoradiotherapy for patients with locally advanced NSCLC is typically associated with high progression rates. In the PET-Boost trial, individualized dose escalation utilizing hypofractionation and functional imaging was tested as a strategy to improve local control. Here we report on sites of first recurrence. Materials/Methods We conducted a multi-institutional phase II study (NCT01024829). Patients with stage II-III NSCLC were randomized to receive either a boosted dose to the primary tumor (PT) as a whole (arm A) or to a region inside the PT with high FDG-uptake (> 50%SUVmax) (arm B). Boosted dose was delivered in 24 fractions of 3.0 Gy up to 5.4 Gy, limited by predefined OAR limits. Individualized isotoxic treatment plans were produced by equalizing the mean lung dose. Concurrent/sequential/no chemotherapy was allowed. This trial was conducted before immunotherapy became standard adjuvant treatment. Follow-up (PET/)CT-scans were scheduled at 3, 6, 12 and 18-months. The trial had a phase II, “pick the winner”, non-comparative design with freedom from local failure rate at 1-year as primary endpoint. Overall survival was estimated using the Kaplan-Meier method. Local and regional failures (LF, RF) were assessed by central review of chest-CT scans. Distant metastases (DM) were reported by local investigators. LF, RF and DM are reported as site of first recurrence. Cumulative incidence rates of first recurrence site were, in competing risk with death, estimated by Aalen-Johansen method. Results Between April 2010 and Sept 2017, 54 patients were randomized to arm A and 53 to arm B. Majority of patients had a good performance status (WHO 0-1, 93%), stage III disease (82%) and were treated with concurrent-chemotherapy (72%). In arms A and B respectively, median PT GTV was 99 cc (IQR 67-175) and 115 cc (IQR 64-179). Median fraction dose was 3.25 Gy to PTVwhole PT and 3.5 Gy to PTV50%SUVmax, resulting in median total planned physical dose 78 Gy and 84 Gy respectively. Central review identified 9 patients with missing scans, and 8 not-evaluable scans at 1 year (n = 4 due to surgery, n = 4 due to atelectasis, inflammation or fibrosis). Median FU for LF and RF was 12.6 months. At time of analysis, 36 and 39 patients had experienced a recurrence or died. In arms A and B respectively, the 1-year cumulative incidence rates (reported with 95% CI) for LF as site of first recurrence were 1.9% (0-6%) and 1.9% (0-6%), for RF 1.9% (0-6%) and 5.7% (0-12%), for DM 37.4% (24-50%) and 35.8% (23-49%), and for simultaneous multiple sites 3.7% (0-8%) and 1.9% (0-6%). Median FU for OS was 70.4 months. In arms A and B respectively, estimated 1-year survival was 77% and 62%. Conclusion While high local control rates were achieved in this phase II trial of hypofractionated dose escalation in patients with stage II-III NSCLC, distant metastases were frequently seen in this patient cohort with large primary tumors.