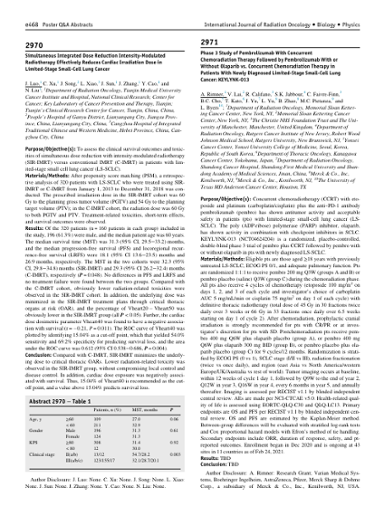 Background: Concurrent chemoradiotherapy with etoposide and platinum (carboplatin/cisplatin) plus the anti‒PD-1 antibody pembrolizumab (pembro) has shown antitumor activity and acceptable safety in patients with limited-stage small-cell lung cancer (LS-SCLC). The poly (ADP-ribose) polymerase (PARP) inhibitor, olaparib, has shown clinical activity in combination with checkpoint inhibitors in patients with SCLC. KEYLYNK-013 (NCT04624204) is a randomized, placebo-controlled, double-blind phase 3 trial of pembro plus concurrent chemoradiation therapy followed by pembro with or without olaparib in patients with newly diagnosed LS-SCLC. Methods: Eligible patients are those aged ≥18 years with previously untreated LS-SCLC, ECOG PS 0/1, and adequate pulmonary function. Patients are randomized 1:1:1 to receive pembro 200 mg Q3W (groups A and B) or pembro placebo (saline) Q3W (group C) during the chemoradiation phase. All patients also receive 4 cycles of chemotherapy (etoposide 100 mg/m2 on days 1, 2, and 3 of each cycle and investigator’s choice of carboplatin AUC 5 mg/mL/min or cisplatin 75 mg/m2 on day 1 of each cycle) with definitive thoracic radiotherapy (total dose of 45 Gy in 30 fractions twice daily over 3 weeks or 66 Gy in 33 fractions once daily over 6.5 weeks starting on day 1 of cycle 2). After chemoradiation, prophylactic cranial irradiation is strongly recommended for patients with CR/PR or at investigator’s discretion for patients with SD. Postchemoradiation patients receive pembro 400 mg Q6W plus olaparib placebo (group A), or pembro 400 mg Q6W plus olaparib 300 mg BID (group B), or pembro placebo plus olaparib placebo (group C) for 9 cycles/12 months. Randomization is stratified by ECOG PS (0 vs 1), SCLC stage (I/II vs III), radiation fractionation (twice vs once daily), and region (east Asia vs North America/western Europe/UK/Australia vs rest of world). Tumor imaging occurs at baseline, within 12 weeks of cycle 1 day 1, followed by Q9W to the end of year 2, Q12W in year 3, Q16W in year 4, every 6 months in year 5, and annually thereafter. Imaging is assessed per RECIST v1.1 by blinded independent central review. AEs are monitored from randomization to 30 days after cessation of study treatment (90 days for serious AEs) and graded per NCI-CTCAE v5.0. Health-related quality of life is assessed using EORTC-QLQ-C30 and QLQ-LC13. Primary endpoints are OS and PFS per RECIST v1.1 by blinded independent central review. OS and PFS are estimated by the Kaplan-Meier method. Between-group differences will be evaluated with stratified log-rank tests and Cox proportional hazard models with Efron’s method of tie handling. Secondary endpoints include ORR, duration of response, safety, and patient-reported outcomes. The study began enrollment in December 2020.