Impact of hypofractionated radiotherapy on patient-reported outcomes in prostate cancer: results up to 5 yr in the CHHiP trial (CRUK/06/016) 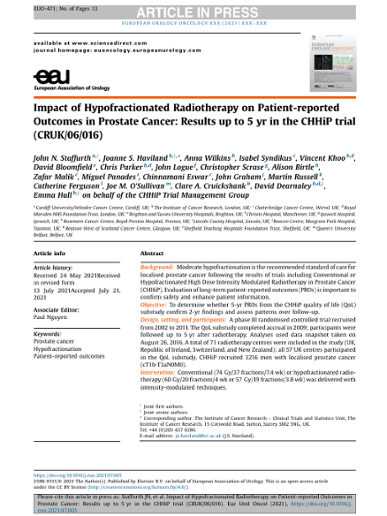 Background: Moderate hypofractionation is the recommended standard of care for localised prostate cancer following the results of trials including Conventional or Hypofractionated High Dose Intensity Modulated Radiotherapy in Prostate Cancer (CHHiP). Evaluation of long-term patient-reported outcomes (PROs) is important to confirm safety and enhance patient information. Objective: To determine whether 5-yr PROs from the CHHiP quality of life (QoL) substudy confirm 2-yr findings and assess patterns over follow-up. Design, setting, and participants: A phase III randomised controlled trial recruited from 2002 to 2011. The QoL substudy completed accrual in 2009; participants were followed up to 5 yr after radiotherapy. Analyses used data snapshot taken on August 26, 2016. A total of 71 radiotherapy centres were included in the study (UK, Republic of Ireland, Switzerland, and New Zealand); all 57 UK centres participated in the QoL substudy. CHHiP recruited 3216 men with localised prostate cancer (cT1b-T3aN0M0). Intervention: Conventional (74 Gy/37 fractions/7.4 wk) or hypofractionated radiotherapy (60 Gy/20 fractions/4 wk or 57 Gy/19 fractions/3.8 wk) was delivered with intensity-modulated techniques. Outcome measurements and statistical analysis: University of California Los Angeles Prostate Cancer Index, Short Form 36 and Functional Assessment of Cancer Therapy-Prostate, or Expanded Prostate Cancer Index Composite and Short Form 12 questionnaires were administered at baseline, before radiotherapy, at 10 wk, and at 6, 12, 18, 24, 36, 48, and 60 mo after radiotherapy. The QoL primary endpoint was overall bowel bother. Results and limitations: The QoL substudy recruited 2100 patients; 1141 5-yr forms were available from 1957 patients still alive (58%). There were no statistically significant differences in 5-yr prevalence of overall "moderate or big" bowel bother: 19/349 (5.4%), 29/381 (7.6%), and 21/393 (5.3%) for 74, 60, and 57 Gy, respectively; overall urinary or sexual bother at 5 yr was similar between schedules. Bowel and urinary symptoms remained stable from 2 to 5 yr for all schedules. Some evidence of worsening overall sexual bother from baseline to 5 yr was less likely in the hypofractionated schedules compared with 74 Gy (odds ratios for increase in bother score vs 74 Gy: 0.55 [0.30-0.99], p = 0.009 for 60 Gy, and 0.52 [0.29-0.94], p = 0.004 for 57 Gy). General QoL scores were similar between schedules at 5 yr. Conclusions: Longer follow-up confirms earlier findings, with similar patient-reported bowel, urinary, and sexual problems between schedules overall. The continued low incidence of moderate or high bother confirms that moderate hypofractionation should be the standard of care for intermediate-risk localised prostate cancer. Patient summary: We looked at patient-reported outcomes up to 5 yr after treatment in a trial of different radiotherapy schedules for prostate cancer. The findings confirmed that shorter radiotherapy schedules were as safe as standard radiotherapy in terms of bowel, urinary, and sexual problems. TAKE HOME MESSAGE: Bowel, urinary, and sexual symptoms were similar between schedules up to 5 yr. The continued low incidence of moderate/high bother confirms that moderate hypofractionated radiotherapy should be considered the standard of care for men with intermediate-risk prostate cancer.