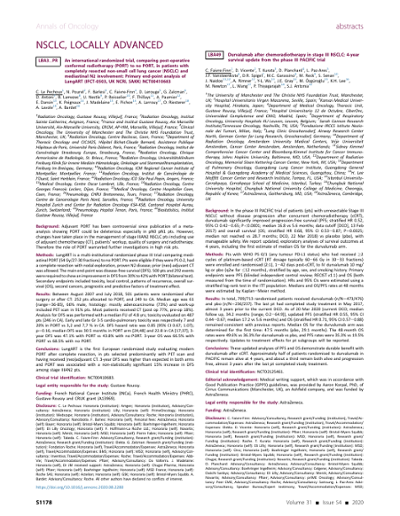 The University of Manchester and The Christie NHS Foundation Trust, Manchester

Background: In the phase III PACIFIC trial of patients (pts) with unresectable Stage III NSCLC without disease progression after concurrent chemoradiotherapy (cCRT), durvalumab significantly improved progression-free survival (PFS; stratified HR 0.52, 95% CI 0.42e0.65; P<0.0001; median 16.8 vs 5.6 months; data cutoff [DCO], 13 Feb 2017) and overall survival (OS; stratified HR 0.68, 95% CI 0.53e0.87; P¼0.0025; median not reached vs 28.7 months; DCO, 22 Mar 2018) vs placebo (pbo), with manageable safety. We report updated, exploratory analyses of survival outcomes at 4 years, including the first estimate of median OS for the durvalumab arm. Methods: Pts with WHO PS 0/1 (any tumour PD-L1 status) who had received _2 cycles of platinum-based cCRT (RT dosage typically 60e66 Gy in 30e33 fractions) were enrolled and randomised (2:1), 1e42 days post-cCRT, to IV durvalumab 10 mg/ kg or pbo (q2w for _12 months), stratified by age, sex, and smoking history. Primary endpoints were PFS (blinded independent central review; RECIST v1.1) and OS (both measured from the time of randomisation). HRs and 95% CIs were estimated using a stratified log-rank test in the ITT population. Medians and OS/PFS rates at 48 months were estimated by KaplaneMeier method. Results: In total, 709/713 randomised patients received durvalumab (n/N¼473/476) and pbo (n/N¼236/237). The last pt had completed study treatment in May 2017, almost 3 years prior to the current DCO. As of 20 Mar 2020 (current DCO; median follow up, 34.2 months [range, 0.2e64.9]), updated PFS (stratified HR 0.55, 95% CI 0.44e0.67; median 17.2 vs 5.6 months) and OS (stratified HR 0.71, 95% CI 0.57e0.88) remained consistent with previous reports. Median OS for the durvalumab arm was determined for the first time: 47.5 months (pbo, 29.1 months). The 48-month OS rates were 49.6% vs 36.3% for durvalumab vs pbo, and PFS rates were 35.3% vs 19.5% respectively. Updates to treatment effects for pt subgroups will be reported. Conclusions: These updated analyses of PFS and OS demonstrate durable benefit with durvalumab after cCRT. Approximately half of patients randomised to durvalumab in PACIFIC remain alive at 4 years, and about a third remain both alive and progression free, almost 3 years after the last pt completed study treatment.