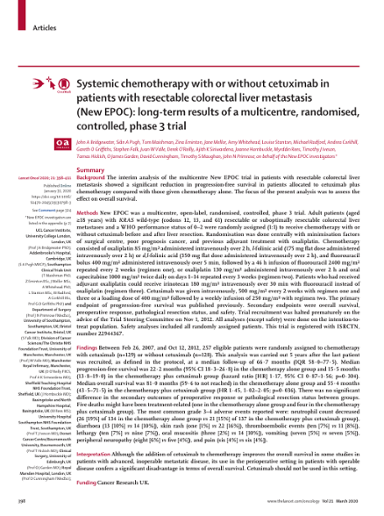 BACKGROUND: The interim analysis of the multicentre New EPOC trial in patients with resectable colorectal liver metastasis showed a significant reduction in progression-free survival in patients allocated to cetuximab plus chemotherapy compared with those given chemotherapy alone. The focus of the present analysis was to assess the effect on overall survival. METHODS: New EPOC was a multicentre, open-label, randomised, controlled, phase 3 trial. Adult patients (aged ?18 years) with KRAS wild-type (codons 12, 13, and 61) resectable or suboptimally resectable colorectal liver metastases and a WHO performance status of 0-2 were randomly assigned (1:1) to receive chemotherapy with or without cetuximab before and after liver resection. Randomisation was done centrally with minimisation factors of surgical centre, poor prognosis cancer, and previous adjuvant treatment with oxaliplatin. Chemotherapy consisted of oxaliplatin 85 mg/m2 administered intravenously over 2 h, l-folinic acid (175 mg flat dose administered intravenously over 2 h) or d,l-folinic acid (350 mg flat dose administered intravenously over 2 h), and fluorouracil bolus 400 mg/m2 administered intravenously over 5 min, followed by a 46 h infusion of fluorouracil 2400 mg/m2 repeated every 2 weeks (regimen one), or oxaliplatin 130 mg/m2 administered intravenously over 2 h and oral capecitabine 1000 mg/m2 twice daily on days 1-14 repeated every 3 weeks (regimen two). Patients who had received adjuvant oxaliplatin could receive irinotecan 180 mg/m2 intravenously over 30 min with fluorouracil instead of oxaliplatin (regimen three). Cetuximab was given intravenously, 500 mg/m2 every 2 weeks with regimen one and three or a loading dose of 400 mg/m2 followed by a weekly infusion of 250 mg/m2 with regimen two. The primary endpoint of progression-free survival was published previously. Secondary endpoints were overall survival, preoperative response, pathological resection status, and safety. Trial recruitment was halted prematurely on the advice of the Trial Steering Committee on Nov 1, 2012. All analyses (except safety) were done on the intention-to-treat population. Safety analyses included all randomly assigned patients. This trial is registered with ISRCTN, number 22944367. FINDINGS: Between Feb 26, 2007, and Oct 12, 2012, 257 eligible patients were randomly assigned to chemotherapy with cetuximab (n=129) or without cetuximab (n=128). This analysis was carried out 5 years after the last patient was recruited, as defined in the protocol, at a median follow-up of 66·7 months (IQR 58·0-77·5). Median progression-free survival was 22·2 months (95% CI 18·3-26·8) in the chemotherapy alone group and 15·5 months (13·8-19·0) in the chemotherapy plus cetuximab group (hazard ratio [HR] 1·17, 95% CI 0·87-1·56; p=0·304). Median overall survival was 81·0 months (59·6 to not reached) in the chemotherapy alone group and 55·4 months (43·5-71·5) in the chemotherapy plus cetuximab group (HR 1·45, 1·02-2·05; p=0·036). There was no significant difference in the secondary outcomes of preoperative response or pathological resection status between groups. Five deaths might have been treatment-related (one in the chemotherapy alone group and four in the chemotherapy plus cetuximab group). The most common grade 3-4 adverse events reported were: neutrophil count decreased (26 [19%] of 134 in the chemotherapy alone group vs 21 [15%] of 137 in the chemotherapy plus cetuximab group), diarrhoea (13 [10%] vs 14 [10%]), skin rash (one [1%] vs 22 [16%]), thromboembolic events (ten [7%] vs 11 [8%]), lethargy (ten [7%] vs nine [7%]), oral mucositis (three [2%] vs 14 [10%]), vomiting (seven [5%] vs seven [5%]), peripheral neuropathy (eight [6%] vs five [4%]), and pain (six [4%] vs six [4%]). INTERPRETATION: Although the addition of cetuximab to chemotherapy improves the overall survival in some studies in patients with advanced, inoperable metastatic disease, its use in the perioperative setting in patients with operable disease confers a significant disadvantage in terms of overall survival. Cetuximab should not be used in this setting. FUNDING: Cancer Research UK.