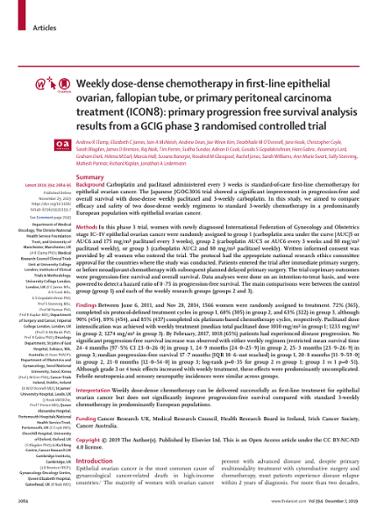 BACKGROUND: Carboplatin and paclitaxel administered every 3 weeks is standard-of-care first-line chemotherapy for epithelial ovarian cancer. The Japanese JGOG3016 trial showed a significant improvement in progression-free and overall survival with dose-dense weekly paclitaxel and 3-weekly carboplatin. In this study, we aimed to compare efficacy and safety of two dose-dense weekly regimens to standard 3-weekly chemotherapy in a predominantly European population with epithelial ovarian cancer. METHODS: In this phase 3 trial, women with newly diagnosed International Federation of Gynecology and Obstetrics stage IC-IV epithelial ovarian cancer were randomly assigned to group 1 (carboplatin area under the curve [AUC]5 or AUC6 and 175 mg/m2 paclitaxel every 3 weeks), group 2 (carboplatin AUC5 or AUC6 every 3 weeks and 80 mg/m2 paclitaxel weekly), or group 3 (carboplatin AUC2 and 80 mg/m2 paclitaxel weekly). Written informed consent was provided by all women who entered the trial. The protocol had the appropriate national research ethics committee approval for the countries where the study was conducted. Patients entered the trial after immediate primary surgery, or before neoadjuvant chemotherapy with subsequent planned delayed primary surgery. The trial coprimary outcomes were progression-free survival and overall survival. Data analyses were done on an intention-to-treat basis, and were powered to detect a hazard ratio of 0á75 in progression-free survival. The main comparisons were between the control group (group 1) and each of the weekly research groups (groups 2 and 3). FINDINGS: Between June 6, 2011, and Nov 28, 2014, 1566 women were randomly assigned to treatment. 72% (365), completed six protocol-defined treatment cycles in group 1, 60% (305) in group 2, and 63% (322) in group 3, although 90% (454), 89% (454), and 85% (437) completed six platinum-based chemotherapy cycles, respectively. Paclitaxel dose intensification was achieved with weekly treatment (median total paclitaxel dose 1010 mg/m2 in group 1; 1233 mg/m2 in group 2; 1274 mg/m2 in group 3). By February, 2017, 1018 (65%) patients had experienced disease progression. No significant progression-free survival increase was observed with either weekly regimen (restricted mean survival time 24á4 months [97á5% CI 23á0-26á0] in group 1, 24á9 months [24á0-25á9] in group 2, 25á3 months [23á9-26á9] in group 3; median progression-free survival 17á7 months [IQR 10á6-not reached] in group 1, 20á8 months [11á9-59á0] in group 2, 21á0 months [12á0-54á0] in group 3; log-rank p=0á35 for group 2 vs group 1; group 3 vs 1 p=0á51). Although grade 3 or 4 toxic effects increased with weekly treatment, these effects were predominantly uncomplicated. Febrile neutropenia and sensory neuropathy incidences were similar across groups. INTERPRETATION: Weekly dose-dense chemotherapy can be delivered successfully as first-line treatment for epithelial ovarian cancer but does not significantly improve progression-free survival compared with standard 3-weekly chemotherapy in predominantly European populations.