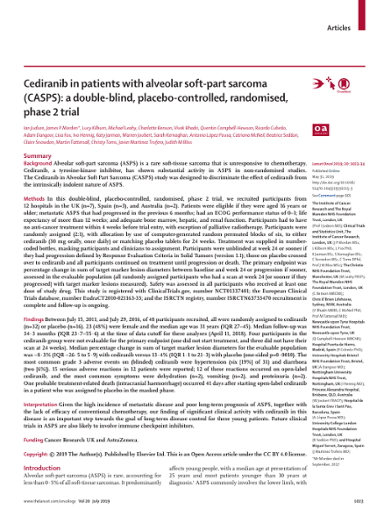 BACKGROUND: Alveolar soft-part sarcoma (ASPS) is a rare soft-tissue sarcoma that is unresponsive to chemotherapy. Cediranib, a tyrosine-kinase inhibitor, has shown substantial activity in ASPS in non-randomised studies. The Cediranib in Alveolar Soft Part Sarcoma (CASPS) study was designed to discriminate the effect of cediranib from the intrinsically indolent nature of ASPS. METHODS: In this double-blind, placebo-controlled, randomised, phase 2 trial, we recruited participants from 12 hospitals in the UK (n=7), Spain (n=3), and Australia (n=2). Patients were eligible if they were aged 16 years or older; metastatic ASPS that had progressed in the previous 6 months; had an ECOG performance status of 0-1; life expectancy of more than 12 weeks; and adequate bone marrow, hepatic, and renal function. Participants had to have no anti-cancer treatment within 4 weeks before trial entry, with exception of palliative radiotherapy. Participants were randomly assigned (2:1), with allocation by use of computer-generated random permuted blocks of six, to either cediranib (30 mg orally, once daily) or matching placebo tablets for 24 weeks. Treatment was supplied in number-coded bottles, masking participants and clinicians to assignment. Participants were unblinded at week 24 or sooner if they had progression defined by Response Evaluation Criteria in Solid Tumors (version 1.1); those on placebo crossed over to cediranib and all participants continued on treatment until progression or death. The primary endpoint was percentage change in sum of target marker lesion diameters between baseline and week 24 or progression if sooner, assessed in the evaluable population (all randomly assigned participants who had a scan at week 24 [or sooner if they progressed] with target marker lesions measured). Safety was assessed in all participants who received at least one dose of study drug. This study is registered with ClinicalTrials.gov, number NCT01337401; the European Clinical Trials database, number EudraCT2010-021163-33; and the ISRCTN registry, number ISRCTN63733470 recruitment is complete and follow-up is ongoing. FINDINGS: Between July 15, 2011, and July 29, 2016, of 48 participants recruited, all were randomly assigned to cediranib (n=32) or placebo (n=16). 23 (48%) were female and the median age was 31 years (IQR 27-45). Median follow-up was 34á3 months (IQR 23á7-55á6) at the time of data cutoff for these analyses (April 11, 2018). Four participants in the cediranib group were not evaluable for the primary endpoint (one did not start treatment, and three did not have their scan at 24 weeks). Median percentage change in sum of target marker lesion diameters for the evaluable population was -8á3% (IQR -26á5 to 5á9) with cediranib versus 13á4% (IQR 1á1 to 21á3) with placebo (one-sided p=0á0010). The most common grade 3 adverse events on (blinded) cediranib were hypertension (six [19%] of 31) and diarrhoea (two [6%]). 15 serious adverse reactions in 12 patients were reported; 12 of these reactions occurred on open-label cediranib, and the most common symptoms were dehydration (n=2), vomiting (n=2), and proteinuria (n=2). One probable treatment-related death (intracranial haemorrhage) occurred 41 days after starting open-label cediranib in a patient who was assigned to placebo in the masked phase. INTERPRETATION: Given the high incidence of metastatic disease and poor long-term prognosis of ASPS, together with the lack of efficacy of conventional chemotherapy, our finding of significant clinical activity with cediranib in this disease is an important step towards the goal of long-term disease control for these young patients. Future clinical trials in ASPS are also likely to involve immune checkpoint inhibitors. FUNDING: Cancer Research UK and AstraZeneca.