Overall Survival with Durvalumab after Chemoradiotherapy in Stage III NSCLC 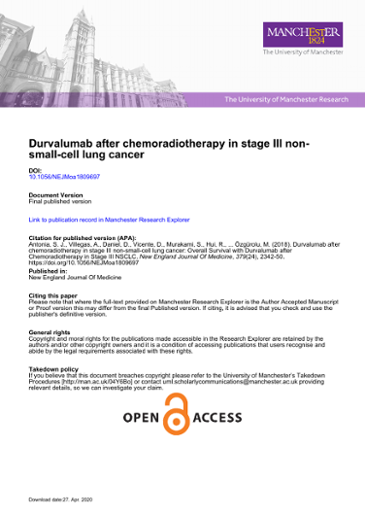 BACKGROUND: An earlier analysis in this phase 3 trial showed that durvalumab significantly prolonged progression-free survival, as compared with placebo, among patients with stage III, unresectable non-small-cell lung cancer (NSCLC) who did not have disease progression after concurrent chemoradiotherapy. Here we report the results for the second primary end point of overall survival. METHODS: We randomly assigned patients, in a 2:1 ratio, to receive durvalumab intravenously, at a dose of 10 mg per kilogram of body weight, or matching placebo every 2 weeks for up to 12 months. Randomization occurred 1 to 42 days after the patients had received chemoradiotherapy and was stratified according to age, sex, and smoking history. The primary end points were progression-free survival (as assessed by blinded independent central review) and overall survival. Secondary end points included the time to death or distant metastasis, the time to second progression, and safety. RESULTS: Of the 713 patients who underwent randomization, 709 received the assigned intervention (473 patients received durvalumab and 236 received placebo). As of March 22, 2018, the median follow-up was 25.2 months. The 24-month overall survival rate was 66.3% (95% confidence interval [CI], 61.7 to 70.4) in the durvalumab group, as compared with 55.6% (95% CI, 48.9 to 61.8) in the placebo group (two-sided P=0.005). Durvalumab significantly prolonged overall survival, as compared with placebo (stratified hazard ratio for death, 0.68; 99.73% CI, 0.47 to 0.997; P=0.0025). Updated analyses regarding progression-free survival were similar to those previously reported, with a median duration of 17.2 months in the durvalumab group and 5.6 months in the placebo group (stratified hazard ratio for disease progression or death, 0.51; 95% CI, 0.41 to 0.63). The median time to death or distant metastasis was 28.3 months in the durvalumab group and 16.2 months in the placebo group (stratified hazard ratio, 0.53; 95% CI, 0.41 to 0.68). A total of 30.5% of the patients in the durvalumab group and 26.1% of those in the placebo group had grade 3 or 4 adverse events of any cause; 15.4% and 9.8% of the patients, respectively, discontinued the trial regimen because of adverse events. CONCLUSIONS: Durvalumab therapy resulted in significantly longer overall survival than placebo. No new safety signals were identified. (Funded by AstraZeneca; PACIFIC ClinicalTrials.gov number, NCT02125461 .).