Search
JavaScript is disabled for your browser. Some features of this site may not work without it.

Do airline pilots and cabin crew have raised risks of melanoma and other skin cancers? Systematic review and meta-analysis.

Miura, K; Olsen, C; Rea, S; Marsden, J; Green, Adèle C (2018)
BACKGROUND: Airline pilots and cabin crew are potentially exposed to hazardous ultraviolet (UV) and cosmic radiation that may increase their risk of melanoma and other skin cancers. OBJECTIVES: To establish precise risks of melanoma and keratinocyte cancer (KC) for airline pilots and for cabin crew based on all studies published to date. METHODS: We searched Medline, ISI science citation index, EMBASE, SCOPUS, and CINAHL to June 2018. All studies of melanoma and KC risk and mortality in airline pilots and cabin crew compared with the general population were eligible. Standardised incidence ratios (SIRs) and mortality ratios (SMRs) were pooled using random effects models. RESULTS: From 5866 articles, we reviewed 44 full-text articles, of which 12 studies whose data were collected mostly between the 1970s-1990s, were eligible for inclusion. The pooled SIR (pSIR) for melanoma in pilots was 2.03 (95% confidence interval (CI) 1.71-2.40) and in cabin crew was 2.12 (95% CI 1.71-2.62). For pilots, pSMR for melanoma was 1.99 (95% CI 1.17-3.40) and for cabin crew was 1.18 (95% CI 0.73-1.89). For KC, the pSIR was 1.86 (95% CI 1.54-2.25) in pilots and 1.97 (95% CI 1.25-2.96) in cabin crew. There was no evidence of study heterogeneity. CONCLUSIONS: Available evidence shows that airline pilots and cabin crew have about twice the risk of melanoma and other skin cancers compared with the general population, with pilots more likely to die from melanoma. However, most of evidence was collected several decades ago and their relevance to contemporary levels of risk is uncertain. 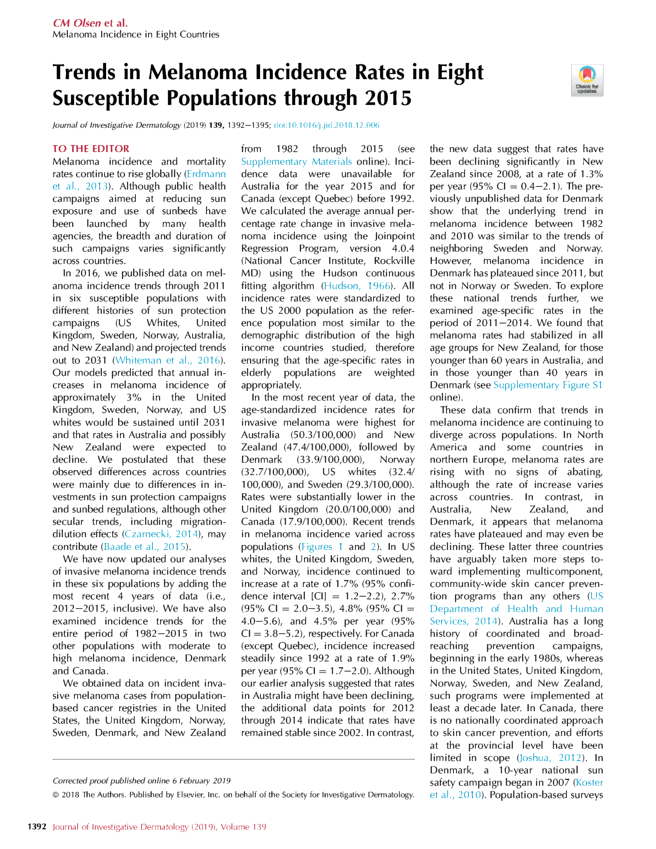 Trends in melanoma incidence rates in eight susceptible populations to 2015.

Association of phenotypic characteristics and UV radiation exposure with risk of melanoma on different body sites.

Ghiasvand, R; Robsahm, TE; Green, Adèle C; Rueegg, CS; Weiderpass, E; Lund, E; Veierod, MB (2018)
IMPORTANCE: Two pathways have been hypothesized for the development of cutaneous melanoma: one typically affects the head and neck, a site with chronic sun damage, and the other affects the trunk, which is less exposed to the sun. However, the possible cause of limb melanomas is less studied under this hypothesis. OBJECTIVE: To investigate the association between phenotypic characteristics, pattern of UV radiation exposure, and risk of melanoma on different body sites. DESIGN, SETTING, AND PARTICIPANTS: This study used data on 161?540 women with information on phenotypic characteristics and UV radiation exposure who were part of the Norwegian Women and Cancer study, a population-based prospective study established in 1991 with exposure information collected by questionnaires at baseline and every 4 to 6 years during follow-up through 2015. Data analysis was performed from October 2017 through May 2018. EXPOSURES: Participants reported hair color, eye color, untanned skin color, number of small symmetric and large asymmetric nevi, and freckling, as well as histories of sunburns, sunbathing vacations, and indoor tanning in childhood, adolescence, and adulthood. MAIN OUTCOMES AND MEASURES: The Norwegian Women and Cancer study was linked to the Cancer Registry of Norway for data on cancer diagnosis and date of death or emigration. Primary melanoma site was categorized as head and neck, trunk, upper limbs, and lower limbs. RESULTS: During follow-up of the 161?540 women in the study (mean age at study entry, 50 years [range, 34-70 years]; mean age at diagnosis, 60 years [range, 34-87 years]), 1374 incident cases of melanoma were diagnosed. Having large asymmetric nevi was a significant risk factor for all sites and was strongest for the lower limbs (relative risk [RR], 3.38; 95% CI, 2.62-4.38) and weakest for the upper limbs (RR, 1.96; 95% CI, 1.22-3.17; P?=?.02 for heterogeneity). Mean lifetime number of sunbathing vacations was significantly associated with risk of trunk melanomas (RR, 1.14; 95% CI, 1.07-1.22) and lower limb melanomas (RR, 1.12; 95% CI, 1.05-1.19) but not upper limb melanomas (RR, 0.98; 95% CI, 0.88-1.09) and head and neck melanomas (RR, 0.87; 95% CI, 0.73-1.04; P?=?.006 for heterogeneity). Indoor tanning was associated only with trunk melanomas (RR for the highest tertile, 1.49; 95% CI, 1.16-1.92) and lower limb melanomas (RR for the highest tertile, 1.33; 95% CI, 1.00-1.76; P?=?.002 for heterogeneity). Skin color, hair color, small symmetric nevi, and history of sunburns were associated with risk of melanoma on all sites. CONCLUSIONS AND RELEVANCE: These results appear to support the hypothesis of divergent pathways to melanoma and that recreational sun exposure and indoor tanning are associated with melanoma on the lower limbs, the most common site of melanoma in women. These findings appear to have important preventive implications. 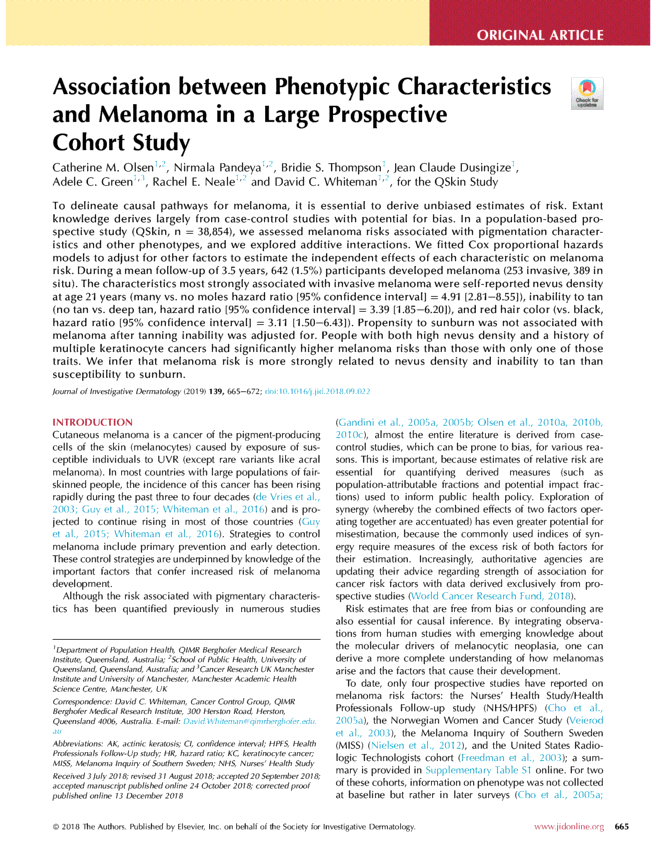 Olsen, CM; Pandeya, N; Thompson, BS; Dusingize, JC; Green, Adèle C; Neale, RE; Whiteman, DC (2018)
To delineate causal pathways for melanoma, it is essential to derive unbiased estimates of risk. Extant knowledge derives largely from case-control studies with potential for bias. In a population-based prospective study (QSkin, n=38,854), we assessed melanoma risks associated with pigmentation characteristics and other phenotypes, and explored additive interactions. We fitted Cox proportional hazards models adjusting for other factors to estimate independent effects of each characteristic on melanoma risk. During a mean follow-up of 3.5 years, 642 (1.5%) participants developed melanoma (253 invasive, 389 in situ). The characteristics most strongly associated with invasive melanoma were self-reported nevus density at age 21 ('many' vs. no moles HR 4.91 [2.81-8.55]), inability to tan ('no tan' vs. 'deep tan' HR 3.39 [1.85-6.20]) and red hair color (vs. black HR 3.11 [1.50-6.43]). Notably, propensity to sunburn was not associated with melanoma after adjusting for tanning inability. People with both high nevus density and a history of multiple keratinocyte cancers had significantly higher melanoma risks than those having only one of those traits. We infer that melanoma risk is more strongly related to nevus density and inability to tan than susceptibility to sunburn. 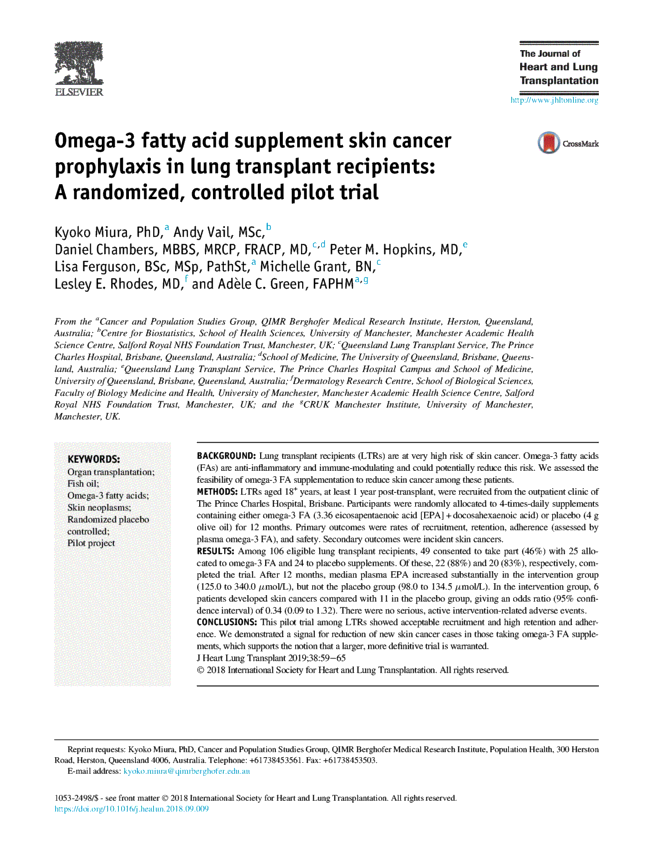 Miura, K; Vail, A; Chambers, D; Hopkins, PM; Ferguson, L; Grant, M; Rhodes, LE; Green, Adèle C (2018)
BACKGROUND: Lung transplant recipients (LTRs) are at very high risk of skin cancer. Omega-3 fatty acids (FAs) are anti-inflammatory and immune-modulating and could potentially reduce this risk. We assessed the feasibility of omega-3 FA supplementation to reduce skin cancer among these patients. METHODS: LTRs aged 18+ years, at least 1 year post-transplant, were recruited from the outpatient clinic of The Prince Charles Hospital, Brisbane. Participants were randomly allocated to 4-times-daily supplements containing either omega-3 FA (3.36 eicosapentaenoic acid [EPA]?+?docosahexaenoic acid) or placebo (4 g olive oil) for 12 months. Primary outcomes were rates of recruitment, retention, adherence (assessed by plasma omega-3 FA), and safety. Secondary outcomes were incident skin cancers. RESULTS: Among 106 eligible lung transplant recipients, 49 consented to take part (46%) with 25 allocated to omega-3 FA and 24 to placebo supplements. Of these, 22 (88%) and 20 (83%), respectively, completed the trial. After 12 months, median plasma EPA increased substantially in the intervention group (125.0 to 340.0 �mol/L), but not the placebo group (98.0 to 134.5 �mol/L). In the intervention group, 6 patients developed skin cancers compared with 11 in the placebo group, giving an odds ratio (95% confidence interval) of 0.34 (0.09 to 1.32). There were no serious, active intervention-related adverse events. CONCLUSIONS: This pilot trial among LTRs showed acceptable recruitment and high retention and adherence. We demonstrated a signal for reduction of new skin cancer cases in those taking omega-3 FA supplements, which supports the notion that a larger, more definitive trial is warranted.

The impact of changing the prevalence of overweight/obesity and physical inactivity in Australia: an estimate of the proportion of potentially avoidable cancers 2013-2037

Wilson, LF; Baade, PD; Green, Adèle C; Jordan, SJ; Kendall, BJ; Neale, RE; Olsen, CM; Youlden, DR; Webb, PM; Whiteman, DC (2018)
Globally, 39% of the world's adult population is overweight or obese and 23% is insufficiently active. These percentages are even larger in high-income countries with 58% overweight/obese and 33% insufficiently active. Fourteen cancer types have been declared by the World Cancer Research Fund to be causally associated with being overweight or obese: oesophageal adenocarcinoma, stomach cardia, colon, rectum, liver, gallbladder, pancreas, breast, endometrium, ovary, advanced/fatal prostate, kidney, thyroid and multiple myeloma. Colon, postmenopausal breast and endometrial cancers have also been judged causally associated with physical inactivity. We aimed to quantify the proportion of cancer cases that would be potentially avoidable in Australia if the prevalence of overweight/obesity and physical inactivity in the population could be reduced. We used the simulation modelling software PREVENT 3.01 to calculate the proportion of avoidable cancers over a 25-year period under different theoretical intervention scenarios that change the prevalence of overweight/obesity and physical inactivity in the population. Between 2013 and 2037, 10-13% of overweight/obesity-related cancers in men and 7-11% in women could be avoided if overweight and obesity were eliminated in the Australian population. If everyone in the population met the Australian physical activity guidelines for cancer prevention (i.e. engaged in at least 300 min of moderate-intensity physical activity per week), an estimated 2-3% of physical inactivity-related cancers could be prevented in men (colon cancer) and 1-2% in women (colon, breast and endometrial cancers). This would translate to the prevention of up to 190,500 overweight/obesity-related cancers and 19,200 inactivity-related cancers over 25 years. 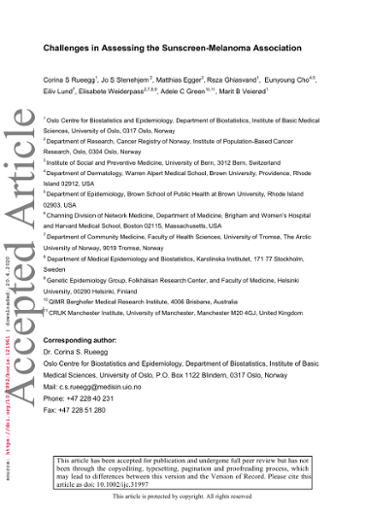 Rueegg, CS; Stenehjem, JS; Egger, M; Ghiasvand, R; Cho, E; Lund, E; Weiderpass, E; Green, Adèle C; Veierod, MB (2018)
Whether sunscreen use affects melanoma risk has been widely studied with contradictory results. To answer this question we performed a systematic review of all published studies, accounting for sources of heterogeneity and bias. We searched for original articles investigating the sunscreen-melanoma association in humans to 28.02.2018. We then used random-effects meta-analysis to combine estimates of the association, stratified by study design. Stratified meta-analysis and meta-regression were used to identify sources of heterogeneity. We included 21'069 melanoma cases from 28 studies published 1979-2018: 23 case-control (11 hospital-based, 12 population-based), 1 ecological, 3 cohort and 1 randomized controlled trial (RCT). There was marked heterogeneity across study designs and among case-control studies but adjustment for confounding by sun exposure, sunburns and phenotype systematically moved estimates towards decreased melanoma risk amongst sunscreen users. Ever- vs. never-use of sunscreen was inversely associated with melanoma in hospital-based case-control studies (adjusted odds ratio (OR)=0.57, 95%confidence interval (CI) 0.37-0.87, pheterogeneity <0.001), the ecological study (rate ratio=0.48, 95%CI 0.35-0.66), and the RCT (hazard ratio (HR)=0.49, 95%CI 0.24-1.01). It was not associated in population-based case-control studies (OR=1.17, 95%CI 0.90-1.51, pheterogeneity <0.001) and was positively associated in the cohort studies (HR=1.27, 95%CI 1.07-1.51, pheterogeneity =0.236). The association differed by latitude (pinteraction =0.042), region (pinteraction =0.008), adjustment for naevi/freckling (pinteraction =0.035), and proportion of never-sunscreen-users (pinteraction =0·012). Evidence from observational studies on sunscreen use and melanoma risk was weak and heterogeneous, consistent with the challenges of controlling for innate confounding by indication. The only RCT showed a protective effect of sunscreen. KEYWORDS: Sunscreen; melanoma; meta-analysis; skin cancer; sun protection 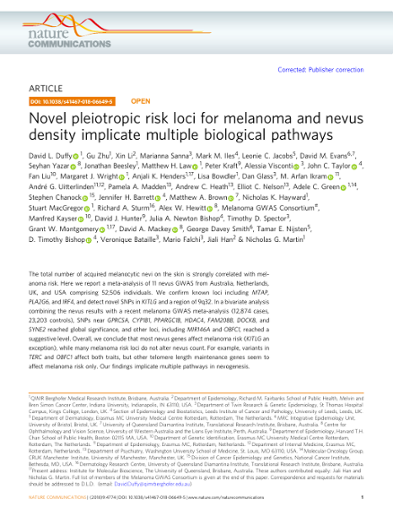